The Big Sky Community is no stranger to adversity – or resilience.

In April, 2020 stress was running high in Big Sky. The Covid threat had brought the ski season to an abrupt halt triggering widespread layoffs. Schools were closed and the streets empty as residents sheltered at home. For a time, even the balm of outdoor recreation was curtailed as people sought to reduce pressure on a health care system bracing for a flood of critically ill coronavirus patients.

Amidst the uncertainty, the Big Sky School District remained a refuge. While students studied at home, kitchen staff continued to distribute meals from the lobby of the Warren Miller Performing Arts Center. According to Superintendent Dustin Shipman, most Montana schools fed only their most at-risk students, but the Big Sky School District’s boxed meals were available to students, staff, and anyone else who needed them. “Those were challenging times,” says Shipman, who would often head outside to the socially distanced queue and visit with people. “Seeing another person’s eyes above their mask meant a lot.”

While it’s hard to overstate the economic, mental, and physical toll of the Covid-19 pandemic on virtually every community on earth, some places have weathered the storm more effectively. Big Sky is one such place. As inspiring as the School District’s response was last spring, it’s actually indicative of a constellation of such efforts across this tight-knit community. From easing social isolation through the wildly popular Big Sky Bakeoff held on Facebook Live, to funding Bozeman fly fishing company Simms’ donation of 400 waterproof-breathable surgical gowns to state hospitals, there are dozens of examples of Big Sky leaders facing down the biggest public health crisis of our lifetimes. “The community’s generosity made a difference for every single one of us,” says Shipman.

As with nearly every ski resort in North America, Big Sky’s ski lifts abruptly stopped spinning the weekend of March 14, 2020,  while the season was in full swing. That Sunday night, as the dominoes fell and lives and livelihoods

were put at risk, Kevin Germain and other community leaders knew they had to take action.

Germain is the chair of the Resort Tax Board which administers sales tax funds. In Big Sky, which straddles two counties and has no town government, the Resort Tax Board plays a critical role in helping fund the fire department, hospital, and other essential services. Knowing additional leadership would be required to combat Covid, Germain organized a panel including representatives from the hospital, schools, law enforcement, and staff from three philanthropic organizations: the Moonlight Community Foundation, the Spanish Peaks Community Foundation, and the Yellowstone Club Community Foundation. On Friday, a mere five days later, a new nonprofit called Big Sky Relief convened its first board meeting armed with a war chest of $1 million from the Resort Tax Board. At the meeting, the community foundations pledged an additional $1 million.

The foundations’ generosity was in line with parent company CrossHarbor Capital Partners’ commitment to pay all 1,800 seasonal employees of the Yellowstone Club, Spanish Peaks, and Moonlight Basin until the end of the traditional ski season in mid-April, whether the employees were working or not. That was a full week before the federal government passed the Cares Act, and two weeks longer than most North American ski resorts paid their laid off seasonal employees.

The first order of business for Big Sky Relief was shoring up the local health care system. Within days, the organization had committed $500,000 to the Big Sky Medical Center’s rush to complete construction of four patient rooms while purchasing five ventilators, funding a rapid Covid testing center, and purchasing a UV sterilizer. Within 60 days, with help from the Big Sky Relief Fund, the small hospital doubled its bed count and tripled its ICU capacity.

The next priority was addressing the needs of those hit hardest by the sudden end to the ski season—including restaurant workers, shuttle drivers, and shop employees. Big Sky Relief subsidized the food bank and counseling services, as well as providing direct grants totaling more than $200,000 to 191 individuals and families to help with rent, food, and healthcare. “I saw the impact of that in person,” says Ciara Wolfe, vice president of philanthropy at the Yellowstone Club Community Foundation. “Employment takes irregular forms in resort communities, and not everyone is eligible for unemployment. To bridge the gap from spring to summer was important for our neighbors.”

Further addressing community needs, the nonprofit Big Sky Community Organization hosted educational online programming as a more wholesome alternative to binge-watching Tiger King. Facebook Live kids storytime hours were balanced by weekly cooking shows from restaurants like Lotus Pad and Sweet Buns Catering, which tutored viewers on dishes like chicken vindaloo and mushroom risotto. The Hungry Moose Market & Deli bagged up ingredients for anyone who signed up. In all, 19 organizations presented some 3,257 hours of instruction to 14,715 participants. 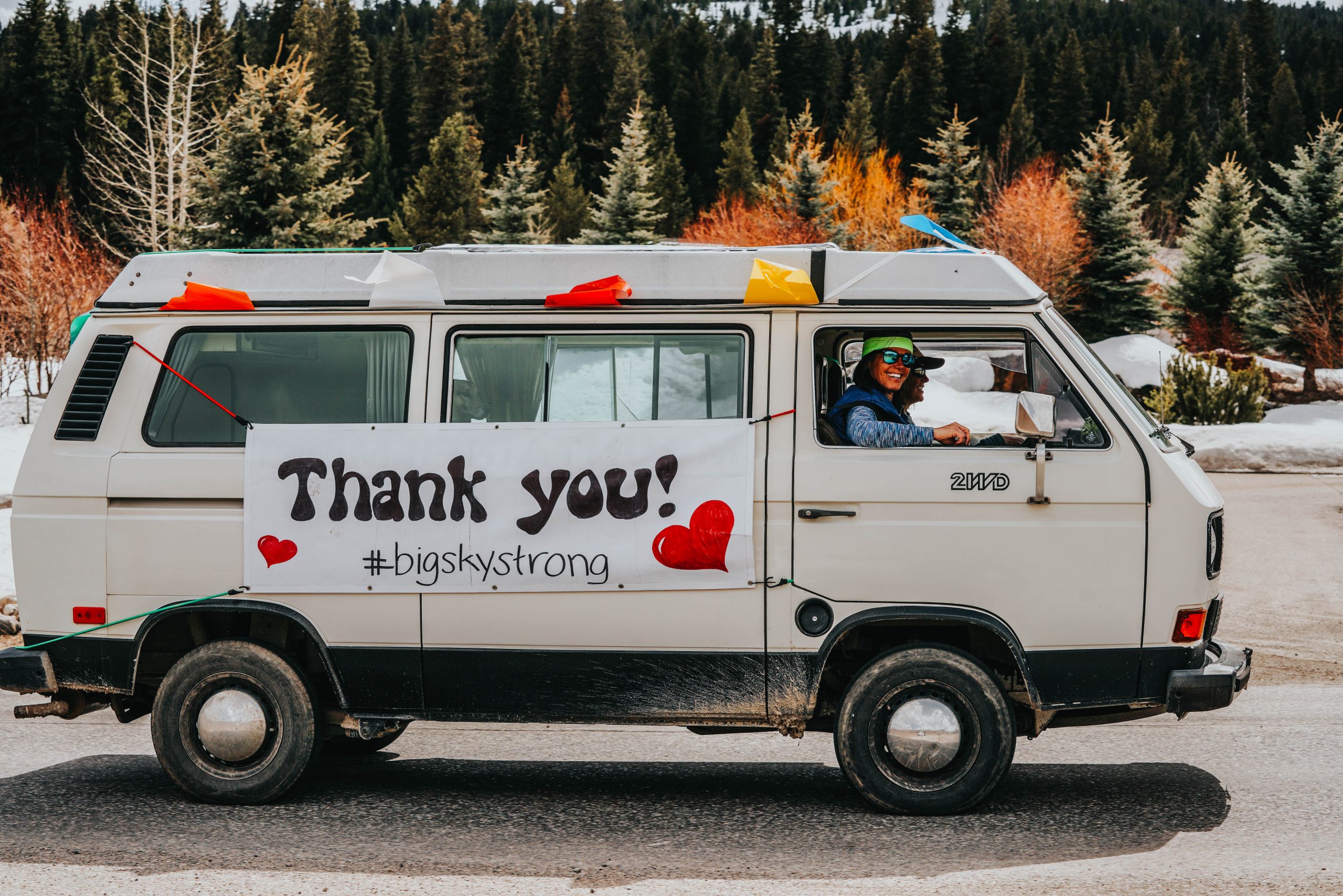 In the days after the ski area closed, Big Sky Relief raised

By summer, Big Sky was able to reopen for business thanks to $465,000 in Big Sky Relief grants to small businesses hit by the loss of spring tourism. Those same businesses were furnished with 150,000 masks to keep the community healthy, and CrossHarbor again stepped up to provide free weekly Covid testing for all of its employees throughout the summer, which turned out to be one of the busiest on record. To accommodate teenagers whose summer camp plans or internships were halted by the pandemic, Big Sky Relief helped create 15 part-time summer internships at local businesses like the Traveling Bean, a mobile coffee cart. “Parents were thrilled to get their kids some work experience, and having a subsidized employee was a huge boost for me,” says the Traveling Bean’s owner Samantha Riley.

In the fall, students suddenly found themselves split into two groups alternating in-person attendance at the schools. The abrupt plans left many working parents in a bind. That’s when yet another organization, the Big Sky Discovery Academy hatched plans to set up a learning support center to keep kids moving through their online curriculum. But the group scrambled to find a location. After a few days of frantic searching, Geyser Whitewater Expeditions offered their building for a nominal fee, and this fall, dozens of elementary school kids took advantage of the center. Thanks to another Big Sky Relief contribution, the service costs parents just $200 a month. “My first reaction was there’s no way we could afford it,” says Robbeye Samardich, whose second grader Parker attended. “But it’s really reasonable, and Parker loves being there.”

Ultimately, all these public actions were meant to keep people safe. But the job isn’t over yet. With the ski season in motion, there remains a demand for easily accessible Covid testing. Big Sky Relief finalized plans to offer some 2,000–3,000 tests per week.

The free testing is the culmination of nearly a year of work from Big Sky Relief. While the pandemic will pass, says the Yellowstone Foundation’s Wolfe, the efforts to address it will have positive lasting impacts. She points to the increased attention to behavioral health the crisis has awoken. Those programs will likely remain, as will the working relationships forged across organizations. “I’ve seen firsthand what a deeply caring and generous community Big Sky is,” she says.