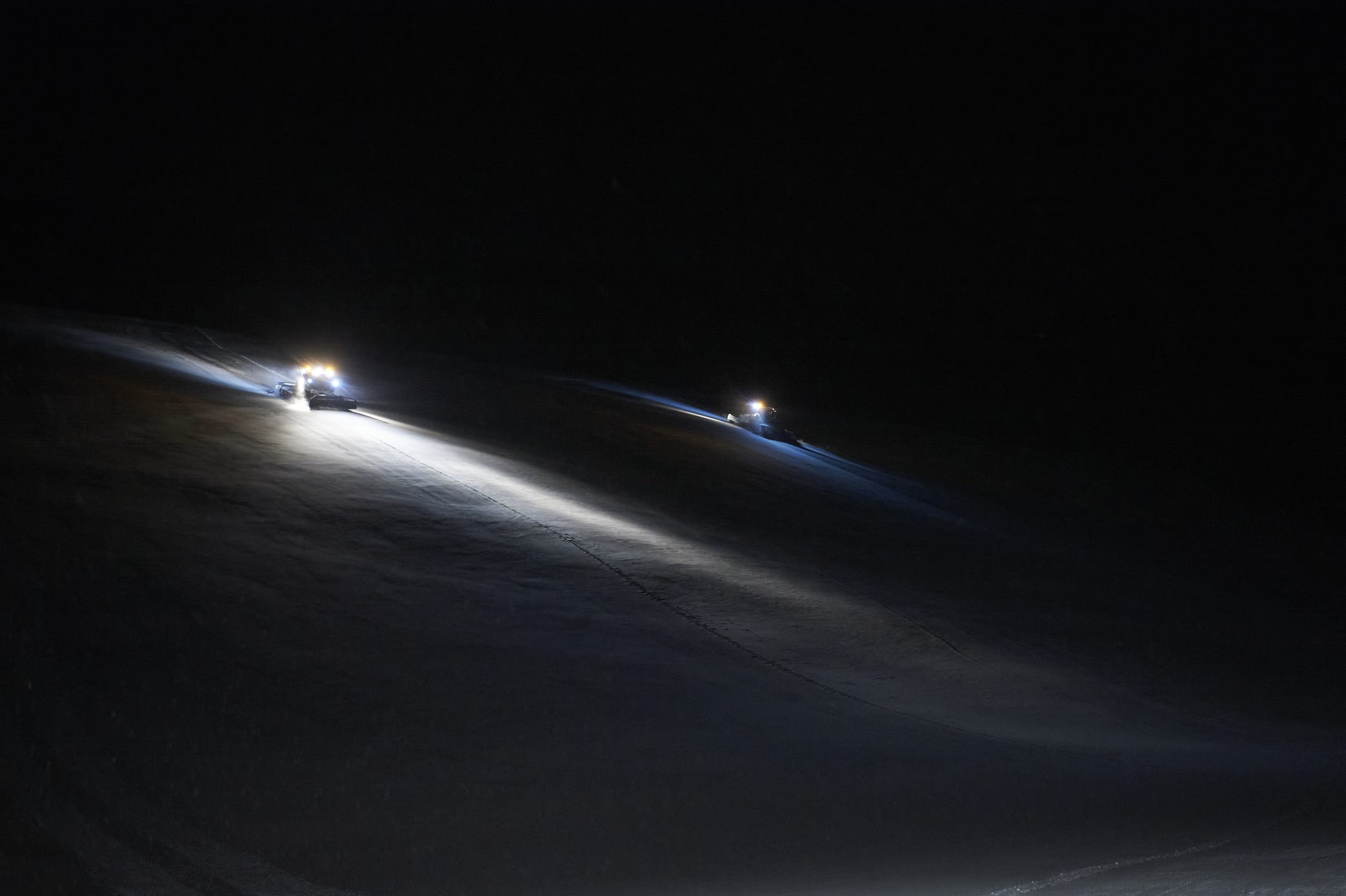 The life of a Big Sky snowcat operator and grooming manager Rob Wilke.

There was a park near our house back home where the town groomed for cross country. I umpired little league in the summer to get in with the county. I nagged them until they let me run a cat. I’d been running heavy equipment with my uncle. I had to wait until I was 16 to do it. Umpiring was $7 a game. Grooming was $50 a night.

It was a similar progression for me here at Big Sky. I got a job at the golf course and once I proved that I wasn’t going to break any equipment or do anything crazy I got the chance to get in a cat. That was the winter of 2001. Grooming satisfies my spatial awareness needs. I’m a little OCD. It was challenging. I was a hotshot 19 year old and the older people were a little intimidating, but I was determined, so I was fast-tracked. Expressing interest still matters.

Ranching and farming kids tend to work out better than somebody that’s never been around a lawnmower. Respecting the weight of things is important. And spatial acuity really matters. There was a young guy who had been working at the golf course. He got lost and went to the wrong building three times. That’s not going to cut it in a cat. I have a buddy who is a helicopter pilot and he told me that driving a snowcat in a storm was exponentially harder than flying a heli. To me, driving a snowcat in a storm is fun. I’m just comfortable in it; 120,000 hours helps.

That original cat I drove back in Minnesota was freezing cold and rudimentary. They were tin cans. You had to layer up. We had a place in the cab where you would strap down a camp stove so you could boil water for heat. The comfort and tech has improved immensely. Screens, dashboards, stereo systems; the new machines are spaceships. They’re incredible. They ride much smoother, they’re faster, and the torque is way higher. But they don’t sound like muscle trucks anymore. They glide and burn much less fuel.

We run six Prinoth Bisons which cost about as much as a mid-level Ferrari each; one PistenBully winch cat, and four older Prinoth BR 350 line groomers. The winch cat isn’t just for steep terrain. That system lets you push a lot of snow while burning less fuel. With a winch cat you can push that snow back uphill a lot easier. And that’s more important all the time. As the sport evolves, the need is for more cats in general because everything gets pounded by skiers at such an exponential rate. Faster lifts and more skiers means more snow getting pushed downhill. 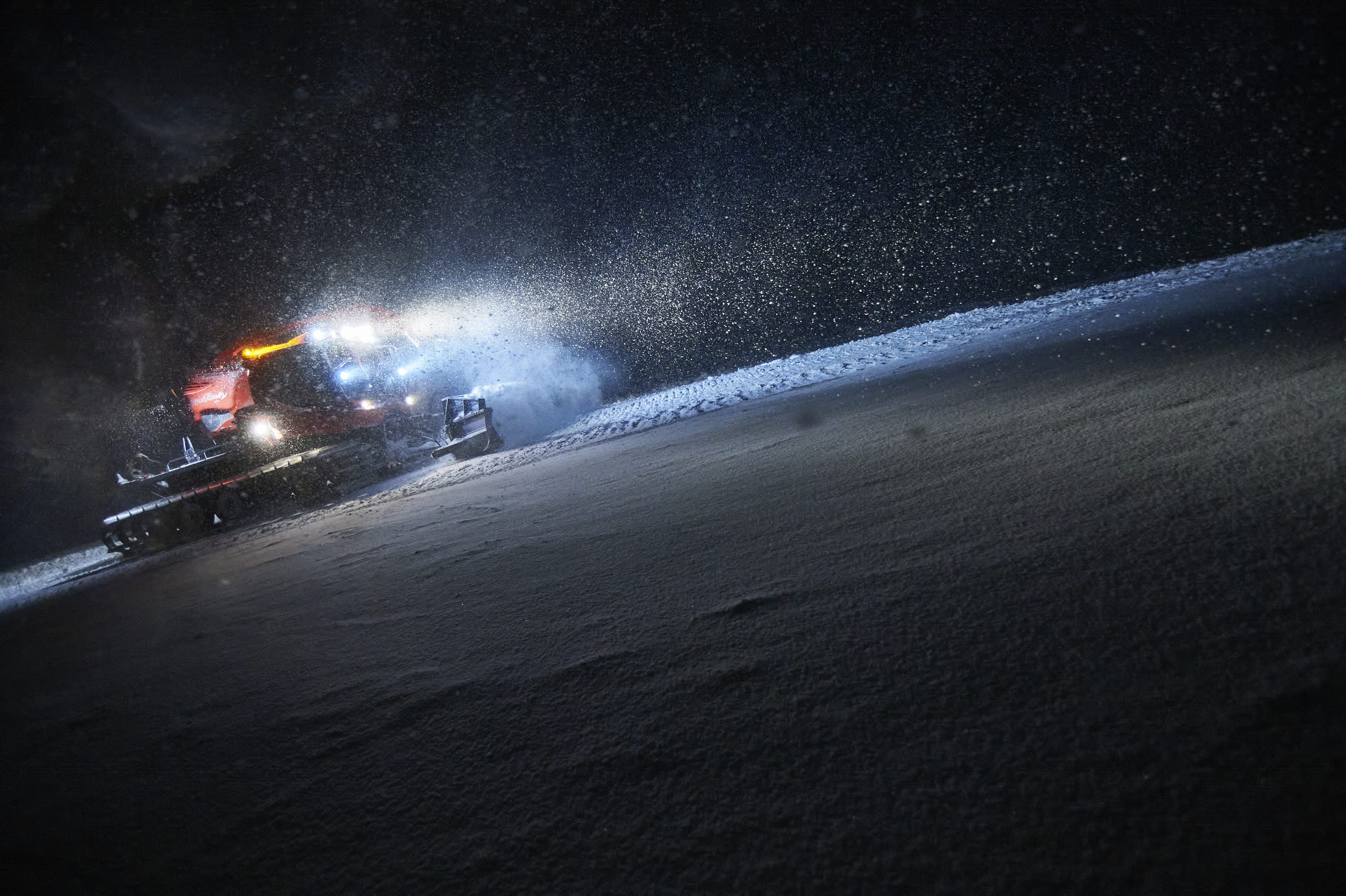 We’ve started to experiment with software. It can monitor speed; what the tiller depth is; hydraulic pressure; bar depth. We can parse that information out into reports to see how efficiently a particular machine or operator is working. Then we can pull that person aside and say ‘get your tiller down a little bit.’ Or if they’re burning too much fuel I can look at the data and see that the tiller was too deep and he was dragging too much snow behind him. It’s not a competition, but with that type of information everyone gets better.

The swing shift starts with people rolling in around 3:00 or 4:00 p.m.; cleaning and greasing; making sure everyone is assigned a cat; going over grooming requests on the spreadsheet; studying the travel plan from patrol; warming the cats up; checking to see if it’s going to start snowing. We’re usually out of the shop at 4:45p.m. Generally that crew of eight people will stick together at first and try to knock out the bigger terrain as a team. That way you can groom all of Andesite in two and a half  hours. Then it breaks up into smaller teams. The Moonlight side gets congested with more than four cats. It’s a battle plan that you put together as you roll out onto the hill. With new snow and avalanche mitigation, you have to be adaptable. As long as the end product is there and nobody is hitting any chunks the next day then it’s a success.

Swing shift wraps around 11:00 p.m. And then the grave shift takes over. Grave is tough. Humans aren’t supposed to be awake all night. We evolved to sleep at night and hunt in the morning. The witching hour happens after 4:00 to 6:00 a.m. I give people some leeway on the grave shift. If they haven’t been getting enough sleep they don’t go out. Most accidents occur when cat drivers fall asleep. We all came here for the same reason, to ski. I’m OK with that. Grave is out the door at 12:45 a.m. at the latest. Their goal is to just crush it. Cover as much ground as possible. They start heading back around 8:00 a.m. I don’t want the cat out there when the public is on the hill. There are special circumstances of course. We need to clear off the Duck Walk after patrol does avalanche mitigation. 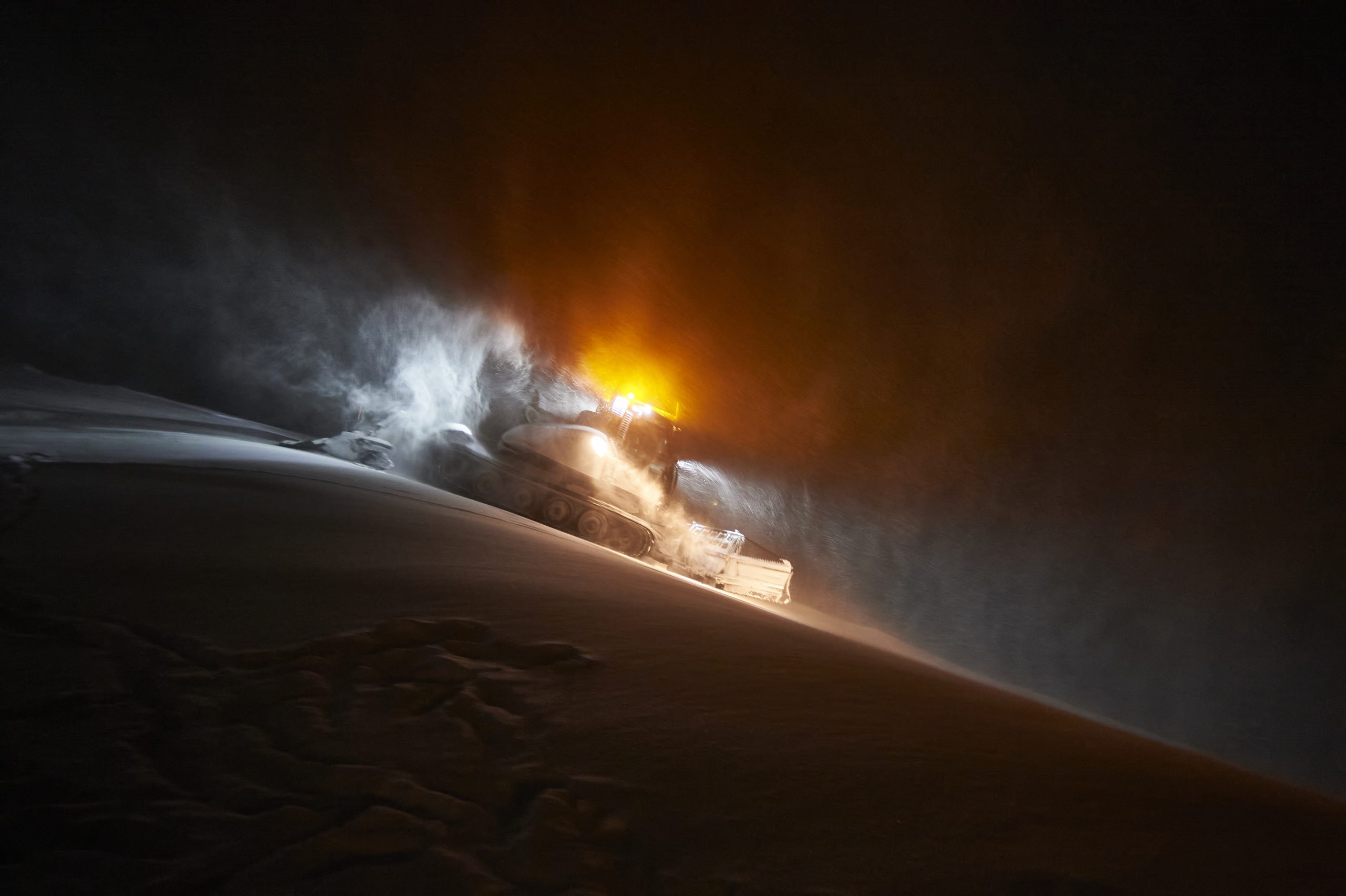 I don’t think most people realize how much goes into grooming. ‘Oh they just get in the cats and drive around and then the mountain gets open,’ is the thinking. Well no, this guy spent five hours pushing snow around on one run so it’s all white for you.

Things do happen. We’re in the mountains and these are mobile machines. I’ve driven off the road before. It happens. Sometimes the snow you’re dragging pulls you off, or the road just collapses. I’ve been lucky. The trees have stopped me.

I’ve heard crazy stories. Apparently a few years ago a guy in Utah drove off a cliff in a bad storm. He was OK. And back in the day at Big Sky legend has it that a guy drove up Marx, which is a crazy run in the alpine. There was no reason for a cat to be up there. He lost one of his tracks and started calling for help. ‘You drove up there,’ they reportedly told him, ‘get yourself back out.’ You get some characters in this world. They look at snowcats as big toys. Cowboys. You can’t have unpredictable people in an unpredictable environment.

There’s another story about a guy—this was 35 years ago—who was out alone. He drove the cat back to the lot and left the machine running with the door wide open. Nobody ever saw him again. Not sure what he saw up there alone in the dark.

I had a really interesting interaction with a mountain lion at night once. He stalked the opposing treeline and kept putting his head out just watching me. He followed me for a good three laps. Another time a wolf followed my path for a mile and a half. The guy in the cat behind me got on the radio and said “Hey man, there’s a wolf in your corduroy.” One time we turned off our lights and watched a big black wolf eat an animal it had killed on the snow we just groomed.

I was working the grave shift once and it was just starting to get light when a juvenile moose came running out of the trees in front of me. I came to a stop thinking, well this is kind of wild, and then he reared up on his hind legs. He wanted to fight the snowcat. I didn’t know what to do! I didn’t want him to hurt himself on the blade, but he wouldn’t budge. After quite some time, I thought, ‘well this has been a fun interaction, but now it’s time for you to go back into the woods.’

Between the skiing, and the social aspects of that, and the tight-knit group of guys and girls on the crew, it makes for an interesting lifestyle. That was one of the parts that I fell in love with. Working grave and having the mountain to yourself. Seeing kick-ass sunset after kick-ass sunrise and taking a minute to pull that in. There’s something to be said about those moments.

Most people enjoy the product we turn out but may never stop and think about what goes on after the lifts close for the day. We all take pride in that. Perfect corduroy is always the goal, but it’s always elusive. Maybe I am OCD, but in my perfect world everything is perfect. In grooming there’s this little section where the tiller overlaps with the last pass, and it creates this tiny ridge we call a happy face because it can look like a smile. But it doesn’t make me happy. ‘Oh god, we have to fix that,’ I think.