The summits of the central Madison Range aren’t the highest or most remote in Montana, but they’re among the most recognizable. With rock nearly as old as any found on Earth, each of these glacially-carved peaks has a story to tell. Native Shoshone hunters were likely the first humans to reach these summits, but modern human history has played out on their flanks, from early-twentieth century trappers to the skiers, mountaineers, and hikers that explore their summits today. 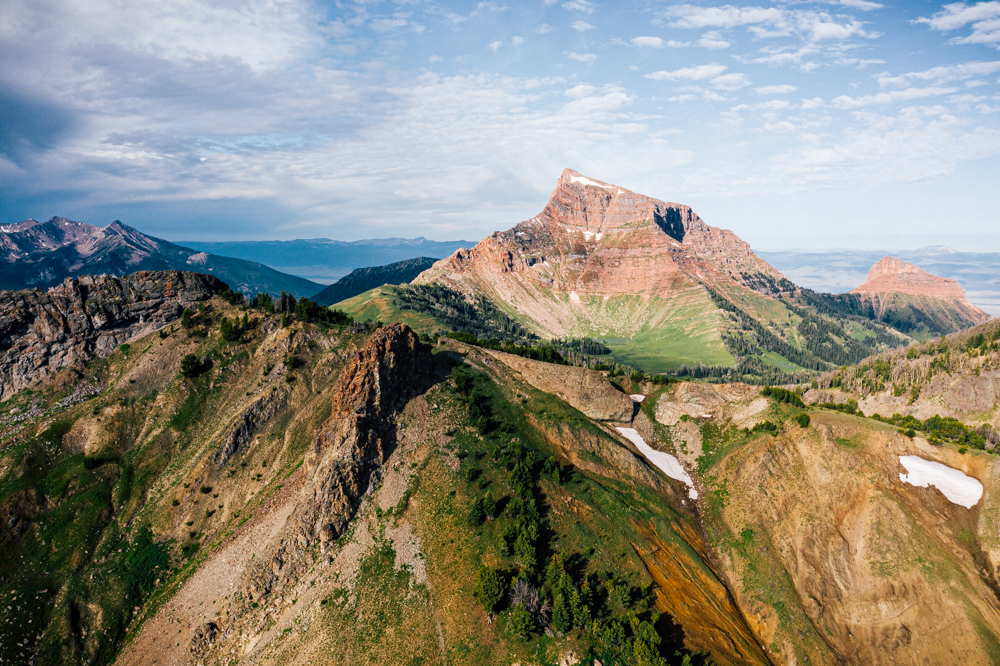 Named for its resemblance to the Great Sphinx of Giza, this regal monolith is visible from 100-plus miles away. Composed largely of a beautiful reddish-brown cobbled conglomerate, it has fascinated geologists for over a century.

The remains of ancient streambeds, the Sphinx and its neighbor, the Helmet, were uplifted when the North American continent collided with the Pacific Ocean floor approximately 75 million years ago, says Rocky Mountain College Professor of Geology Tom Kalakay. While there’s similar rock in the nearby Gravelly Range, and east of Jackson Hole, the Sphinx conglomerate appears to be unique to this location.

Early surveyors likely climbed the peak in the 1880s, and over a century later in 1999, the alpinists Hans Saari and Kris Erickson skied the Lowe Route, a 2,000-foot snow and ice gully on the north face. They called this imposing line, which is clearly visible from Big Sky Resort, “The Sphinxter.”

If you go: For a challenging summer adventure, hike seven miles from the Bear Creek Trailhead in the Madison Valley and scramble up the west gully and ridge, gaining 4,500 to the summit. 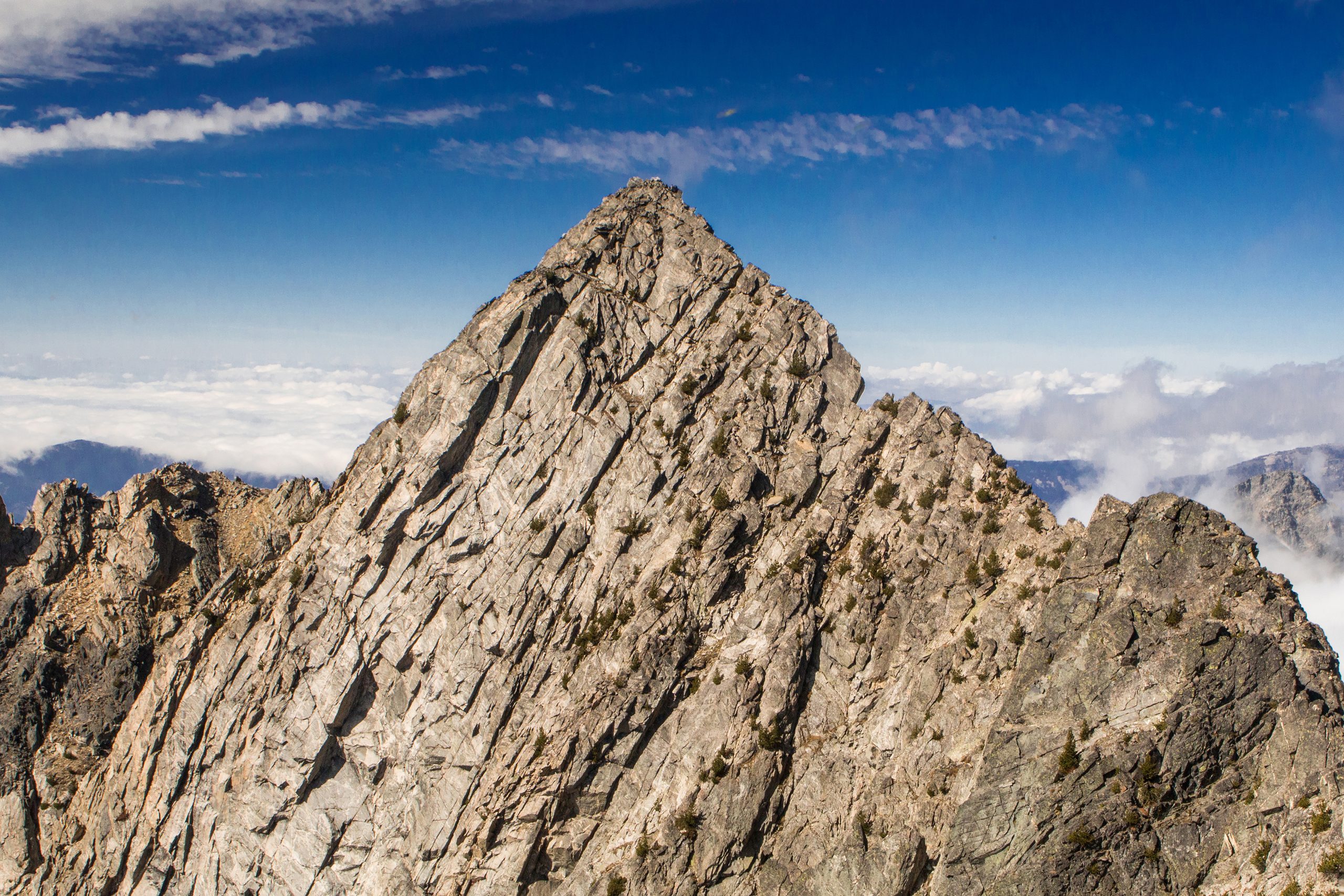 United States Geological Survey maps mark Beehive Basin, Beehive Creek, and Beehive Lake, and the peak above them is clearly their namesake. When viewed from the southwest, its rocky conical summit is shaped like a beehive. The maps, however, label the peak as point 10,742’ for its elevation. No matter. Locals call it Beehive Peak anyway.

The gneiss (it’s a metamorphic rock born by high heat) that forms Beehive’s sheer 900-foot east face and pointed summit formed at least three billion years ago, making it some of the oldest exposed rock in North America, says the geologist Kalakay.

A mellow three-mile hike up the basin leads to a small alpine tarn colloquially known as Egg Lake. The native westslope cutthroat trout in the lake are one of few remaining populations in the Gallatin Basin. Also a busy backcountry skiing destination, Beehive has been the site of many human-triggered avalanches, including a tragic avalanche in the northerly “Hanging Garden” in 2015.

If you go: From the Beehive Basin Trailhead in summer, it’s a moderate three miles to the lake. Summiting involves boulder-hopping, steep snow climbing, class 4 scrambling, and one technical move to surmount the final summit block (many people bring a short rope). Visit in July for peak wildflowers. 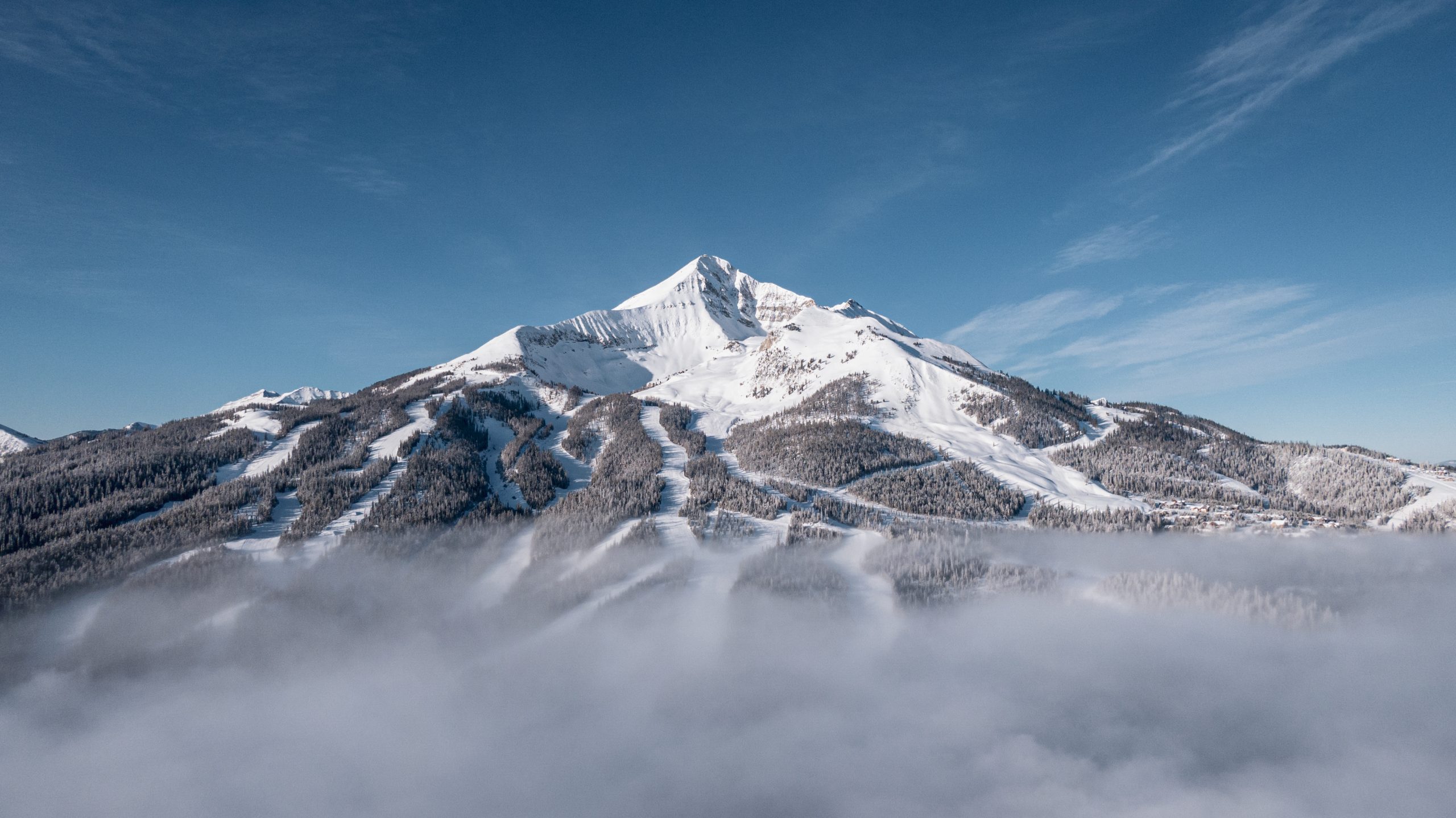 While this stunning peak may look like a volcano, it’s actually the result of magma rising into sandstone rock beneath Earth’s surface. Around 68 million years ago, that molten rock oozed out laterally forming a “Christmas tree laccolith,” according to former Big Sky resident Mary Caperton Morton’s  Aerial Geology of North America. A laccolith is a sheet of volcanic rock injected between layers of sedimentary rock. This series of volcanic andesite sills, shaped like a tree’s branches, remained when glaciers eroded the sandstone, leaving behind a pointed peak.

In Select Peaks of Greater Yellowstone, mountaineering historian Thomas Turiano describes how forest rangers in the 1900s manned a summit fire lookout. And in 1948, Bozeman resident Dave Wessel made the first descent of Lone, hiking from Gallatin Canyon to ski Liberty Bowl on army-surplus skis and cable bindings.

If you go: Even if you aren’t up for skiing Lone Peak’s beyond expert terrain, you can ride the aerial tram to the summit and take in the view. But wait for a slow ski day. 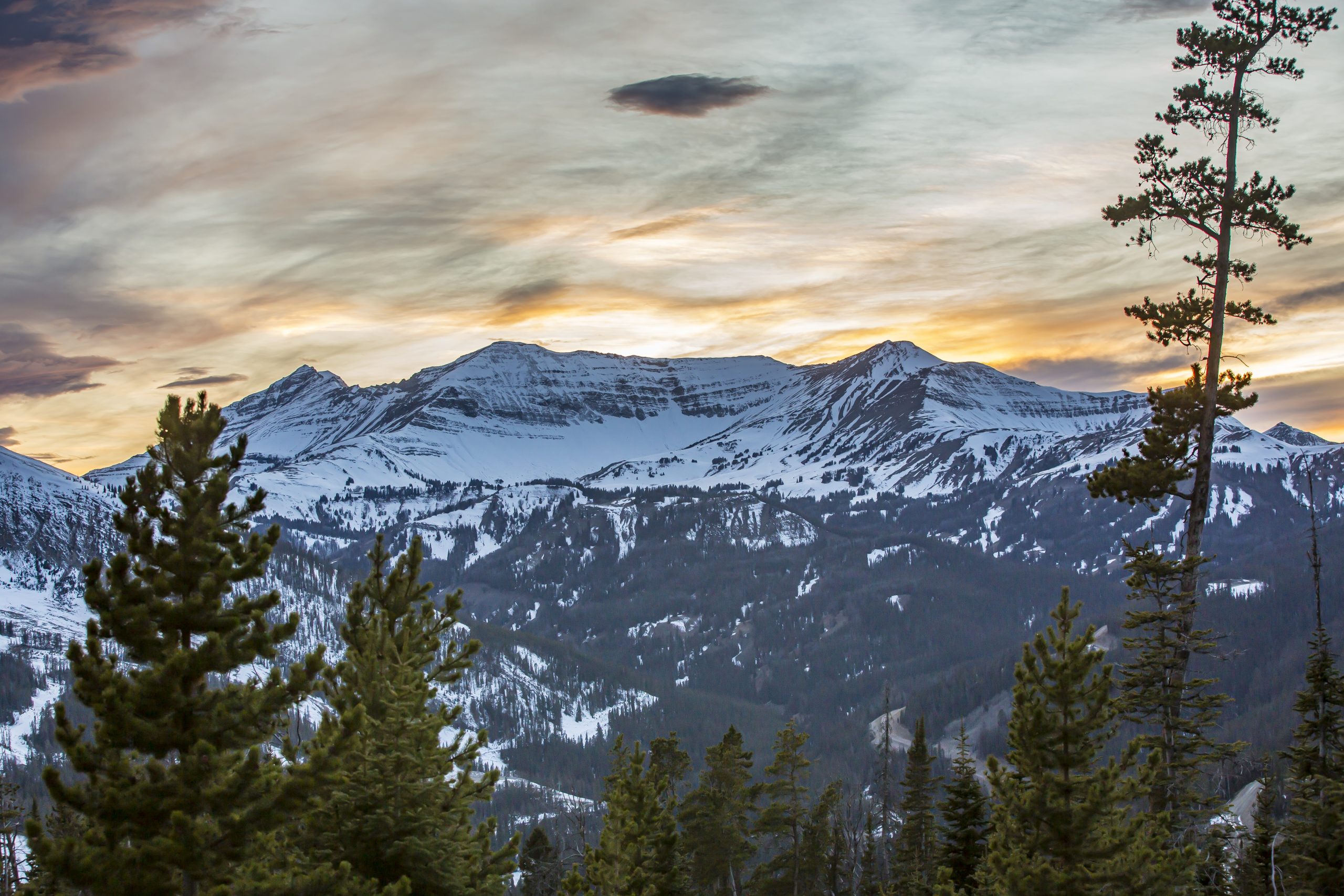 Viewed from above, Cedar Mountain is a circular escarpment of cirques, ridges, summits, and cliffs, and part of the 254,000-acre Lee Metcalf Wilderness.

Madison Valley rancher Bill Brebauch named Cedar Creek in the late 1800s, says Jeff Strickler, author of Bozeman’s Backyard, a new book about area names. The mountain takes its name from the creek, which flows north and then west from one of the peak’s high bowls, but it’s a misnomer: The trees were a cousin of Western Montana’s massive western red cedar, the Rocky Mountain juniper once prevalent along the creekbank before ranching covered its lower stretches.

Below the earthen dam that forms Cedar Lake is a 900-foot waterfall that the late alpinist Alex Lowe solo ice climbed in the 1980s.

If you go: From the Cedar Creek Trailhead on Jack Creek Road, follow an excellent trail popular with horse packers up the long, flat drainage. After around eight miles you’ll reach a basin with a view of the waterfall. From here, the trail to the lake switchbacks up a cliff for 1,000 feet, and it’s another 700 feet of goat scrambling to the summit. 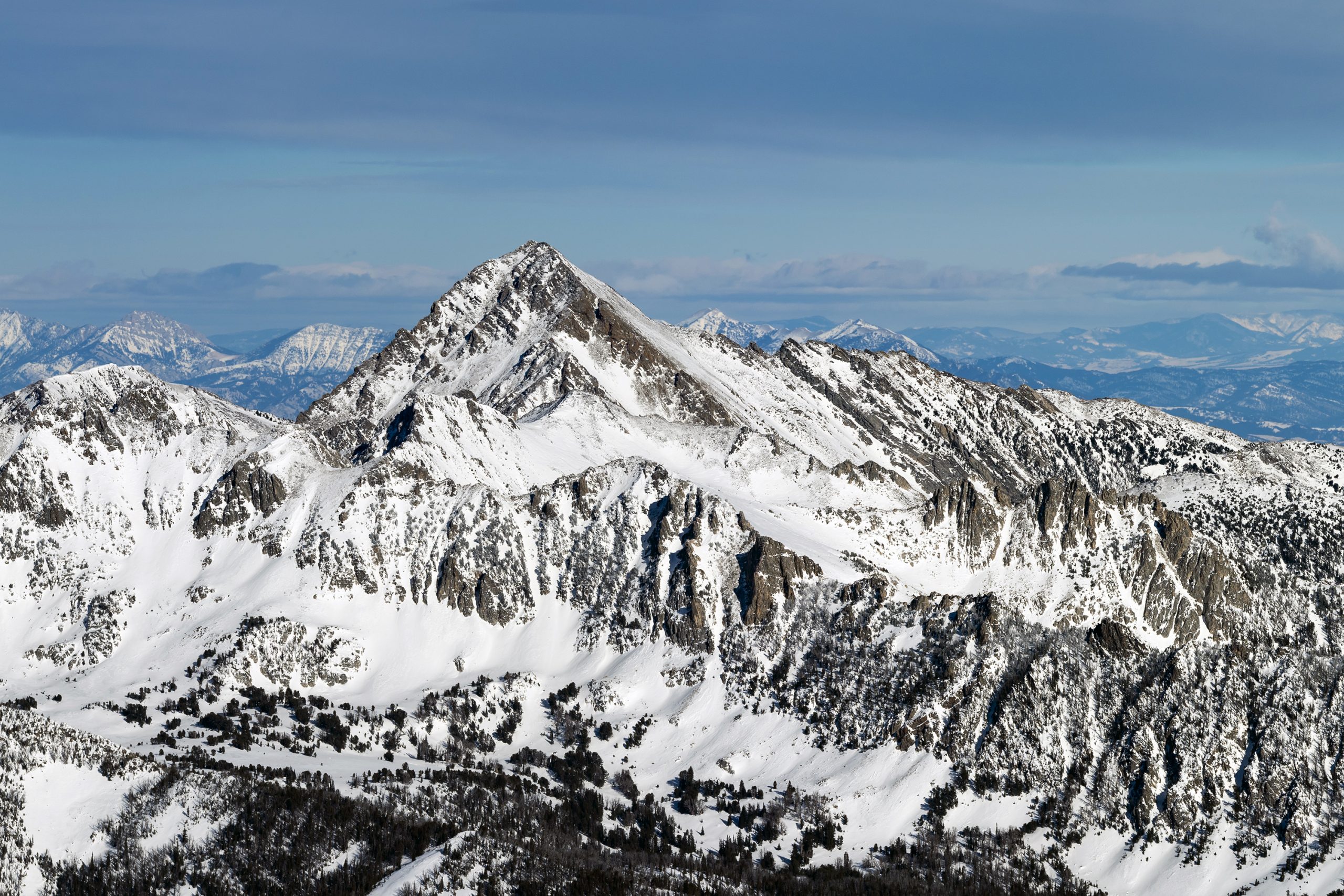 Look north from Big Sky Resort on a sunny winter morning, and six miles away a stately pyramid rises above the rest of the Spanish Peaks. Gallatin is recognizable by a cliffed rock triangle that plummets off its west side, and a broad, snow-covered south face that angles 2,000 feet down to Hell Roaring Creek. If you’re a skier, you can’t help but salivate.

Surveyors likely climbed Gallatin in the 1880s, naming it after the river (which Lewis and Clark named for Thomas Jefferson’s Secretary of the Treasury Albert Gallatin.) During a later survey in 1922, Captain William M. Scaife led a team up Hell Roaring to “Station Gallatin” atop the mountain. For the survey, according to Turiano’s Select Peaks, they lit up a summit station at night and measured angles to other illuminated stations on the horizon.

If you go: There are several ways to approach from Highway 191, but the Beehive and Bear Basin trailheads in Big Sky offer higher elevation launch points. Both involve crossing two passes and 10-plus miles of hiking. Camp by one of the alpine lakes below the peak and make it an overnight trip.

The wildlife viewing in Big Sky is equally as spec

Nestled in the heart of The Ranches neighborhood o

From everyone at The Big Sky Real Estate Company,

We are thrilled to announce the public opening of